You can make supporting patients a family affair too, through blood donation, plasma donation and all ways to give

For so many of our donors, supporting Canada’s Lifeline is a family affair.

A teenager cheers her aunt’s 101st blood donation while also donating blood herself for the first time.

A family auctions art as a fundraiser, to honour a beloved mother and artist who received blood transfusions.

While their little boy is having heart surgery, made possible by blood donations, his parents donate blood for the first time themselves — and then rally others to do the same.

And how could we forget the 15 members of an extended family who made blood donation part of their holiday celebration simply because “Schmidt happens”?

We are so grateful for all these incredible gifts that allow us to support patients across Canada. Below, meet a few more of the families at the heart of Canada’s Lifeline. You might just be inspired to start a lifesaving family tradition of your own. 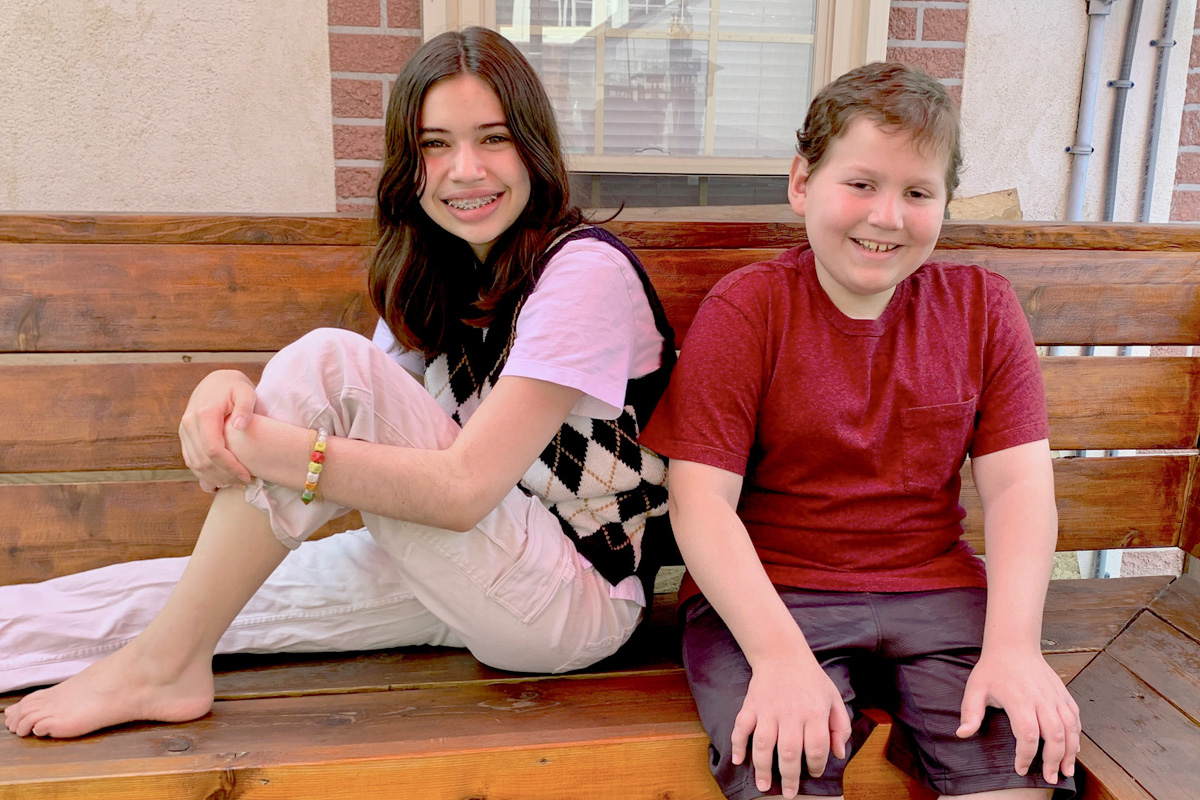 In March 2020, when the world shut down because of COVID-19, Ollie Acosta-Pickering was battling a rare blood cancer. Even worse, the pandemic put the plan for his potentially lifesaving stem cell transplant in jeopardy.

Today, Ollie is thriving after receiving stem cells from his older sister, and his family advocates powerfully for Canadian Blood Services Stem Cell Registry as well as for donation of blood and plasma. Last summer, they formed a Partners for Life team and set out to fill blood donation appointments in honour of Ollie’s transplant anniversary.

Read more: ‘Gratitude isn’t a big enough word to describe how we feel’ 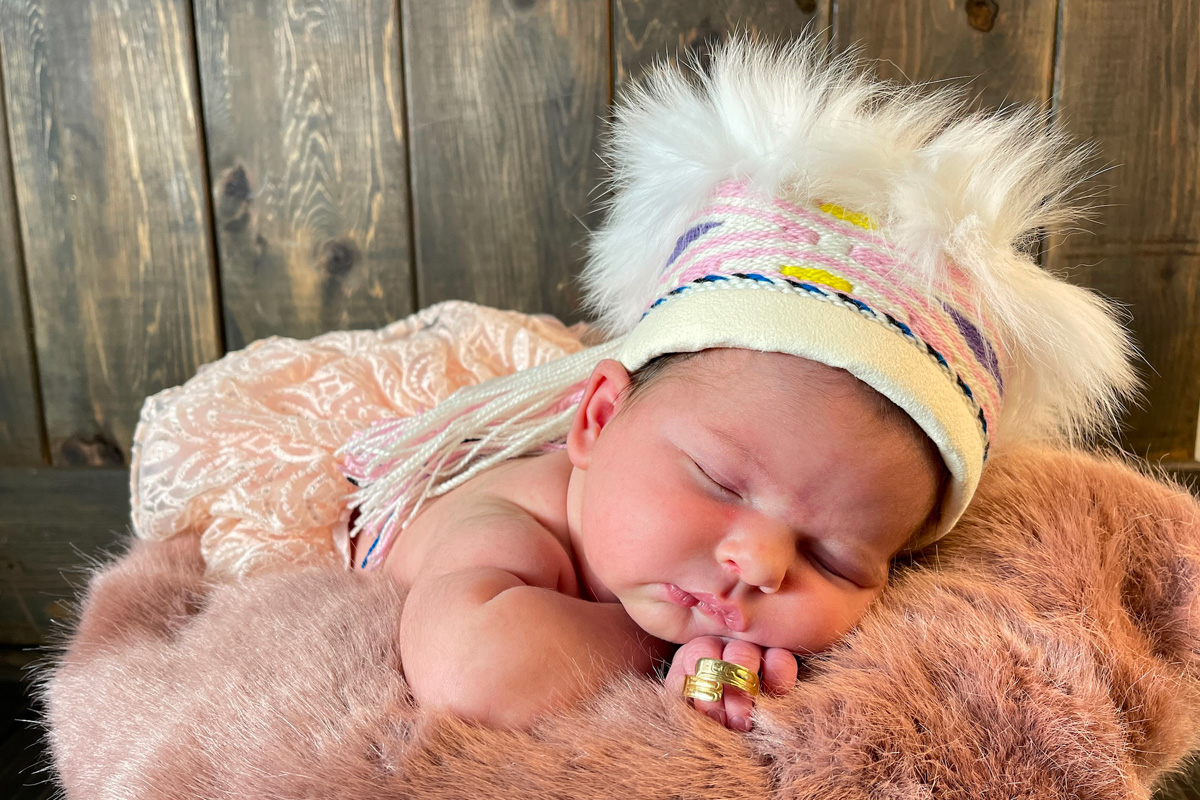 By its nature, cord blood donation is always a family affair. “Cord blood” refers to the blood left inside the umbilical cord and placenta after a baby is born, and which contains stem cells that can be used for lifesaving transplants. Mothers who deliver their babies at hospitals in four Canadian cities can choose to donate cord blood to Canadian Blood Services’ Cord Blood Bank, which can then supply it to any matching patient in need.

In one incredible case, a new mother in B.C. learned her new baby’s cord blood was matched to a patient while she was still in hospital recovering from the birth.

Lena Mallary was inspired to donate the cord blood of her own “miracle baby,” Flora-Lyn Russ, after a cord blood stem cell transplant saved the life of another child she knew. Lena is Indigenous — Haida, from the Maaman Gitanee clan in Old Massett, B.C. Donations like hers are essential to increasing the diversity of our cord blood bank, to better match the needs of all patients.

Read more: How an Indigenous cord blood donor was inspired by a patient 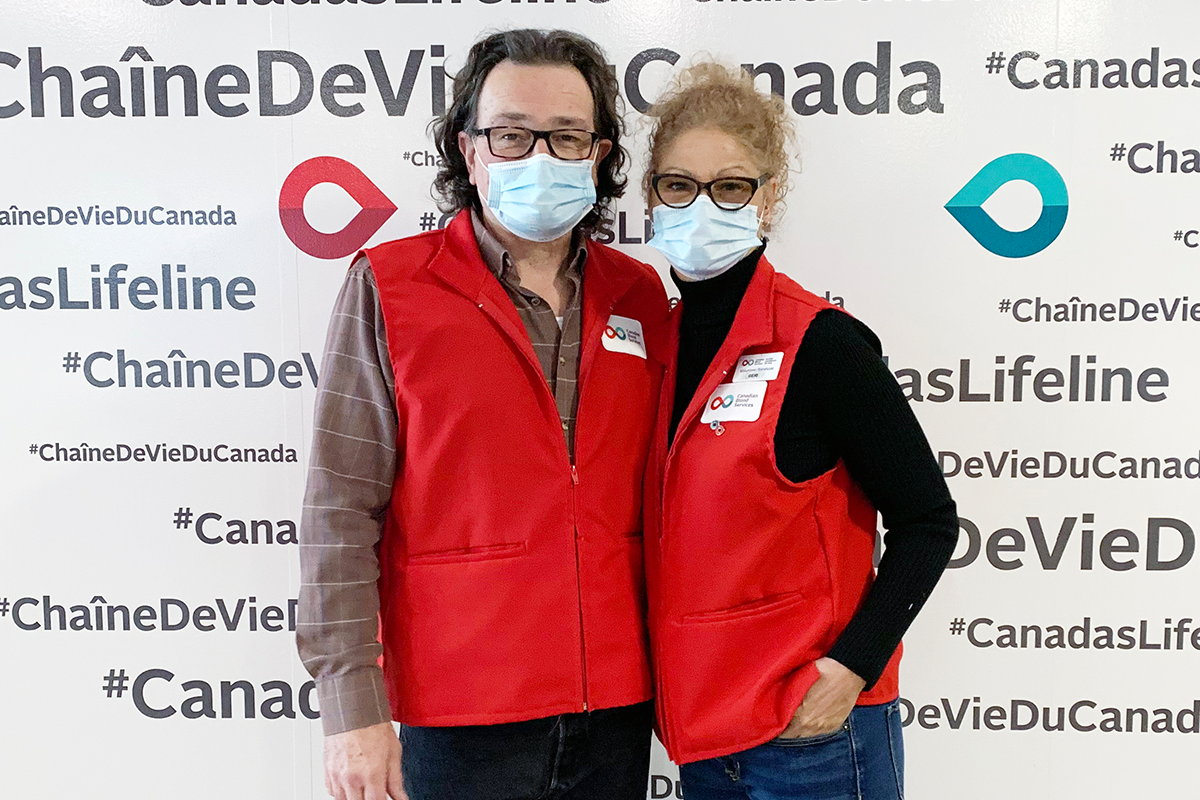 This Sudbury couple’s life is filled with connections to Canada’s Lifeline.

Paul and Geri Laforet both volunteer at Canadian Blood Services’ plasma donor centre in Sudbury, Ont., and Geri donates plasma as well. The service is personal. Geri’s sister is among the patients who have received plasma for treatment of Guillain-Barré syndrome.

As for Paul, he followed his father’s example when he became an avid blood donor many years ago. He only stopped after developing a rare blood cancer — and receiving blood himself as part of his successful treatment.

Mother, daughter and granddaughter give new meaning to the term ‘blood relatives’ 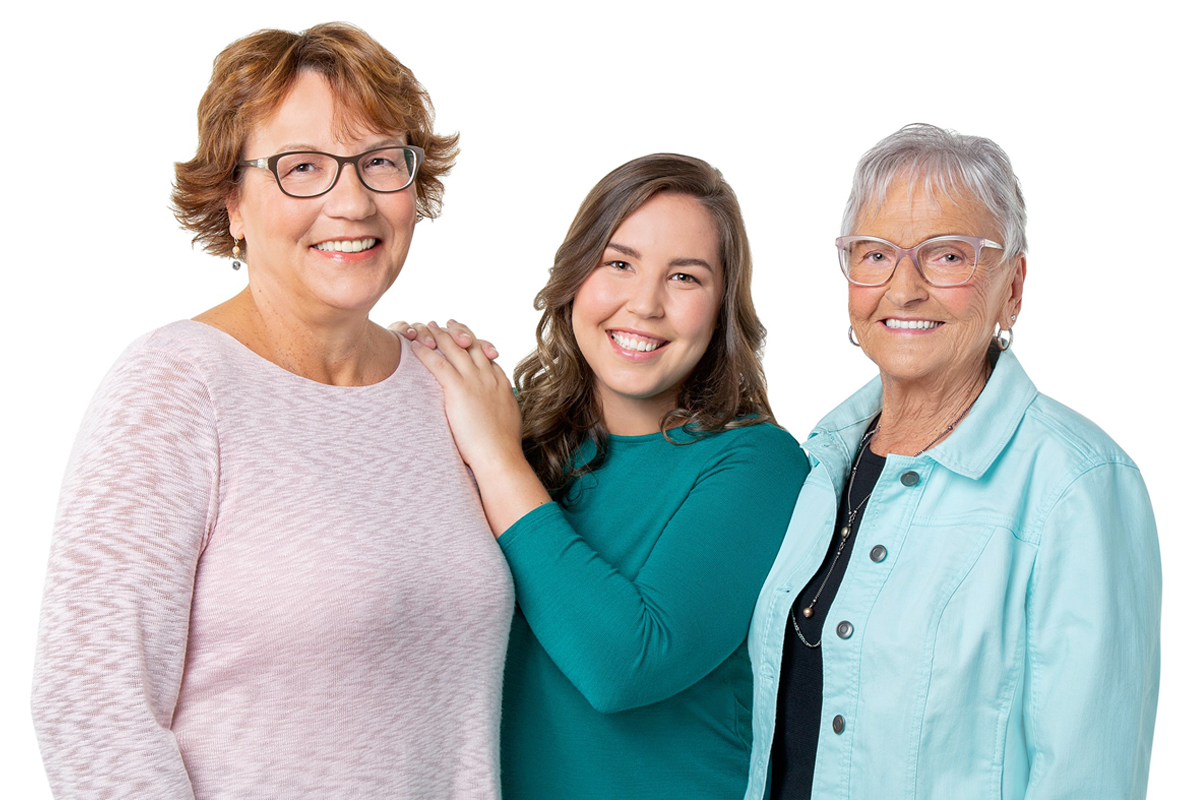 Brenda Deacon, her daughter Julia Deacon, and her mother Vicki Mills have all donated to Canadian Blood Services.

Vicki Mills first started donating blood at age 19, during lunch breaks at her first job. She was inspired by her employer, who needed regular transfusions because of a chronic health problem.

Many years later, Vicki would need blood herself on more than one occasion: after a miscarriage, and during recovery from open-heart surgery. She is not eligible to donate blood any longer because of a particular prescription medication. But her daughter, Brenda Deacon, has become a committed blood donor, while Brenda’s daughter, Julia Deacon, supports Canada’s Lifeline as an employee and financial donor.

*After the story above was published, Julia also made her first blood donation in early February 2022. An update to donor eligibility criteria in March 2021 made it possible for some people with type 1 diabetes to donate blood.

His wife lost her cancer battle, but donors gave them hope and time 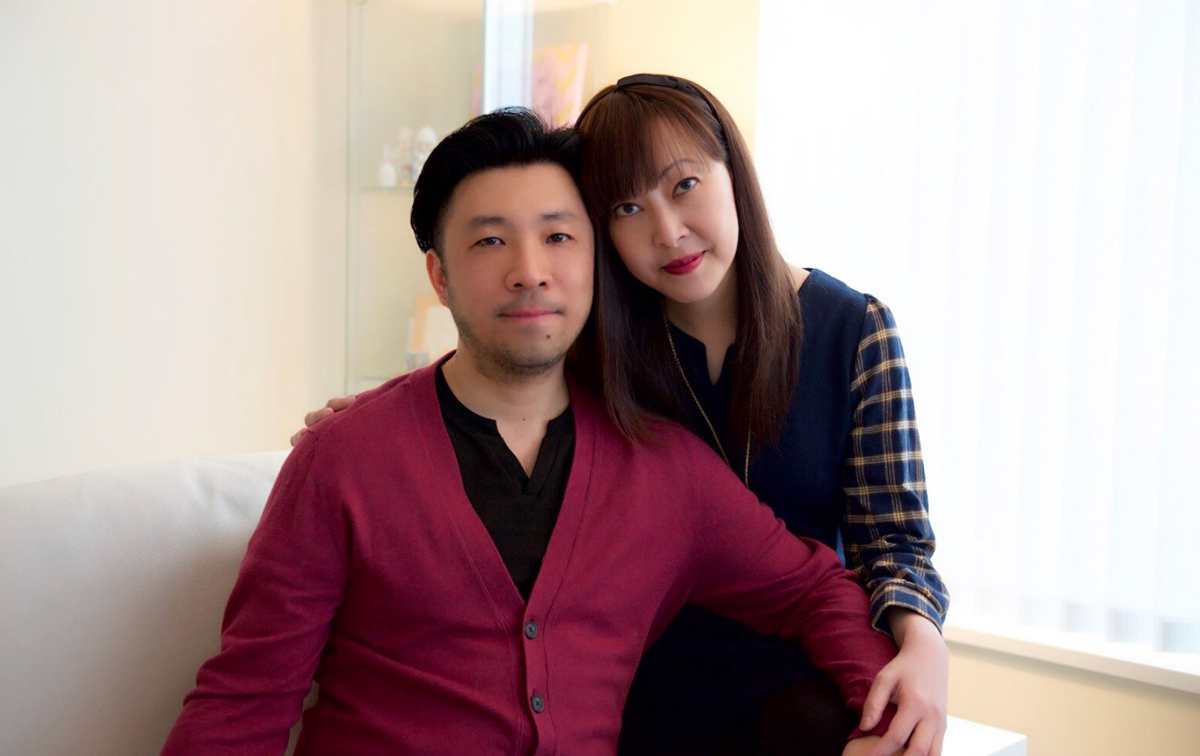 Edmond Chan is a blood donor and Partners for Life champion who is inspired by his late wife Christina’s experience receiving blood during cancer treatment.

All donors, whether they give alone or as a family, hope their gifts are lifesaving. But sometimes the gift is one of time, for a patient to spend with their loved ones. In turn, those loved ones may become passionate supporters of Canada’s Lifeline themselves.

In 2003, Edmond Chan’s wife, Christina, was diagnosed with acute myeloid leukemia. Donations of blood and stem cells helped her to survive for another 17 years.

During Christina’s illness, Edmond became a Partners for Life champion at Boeing Vancouver. In that role he raised awareness about how to become a donor and organized group blood donations for his colleagues. Christina’s story provided both him and his colleagues with a reason to donate blood.

Read more: His wife lost her cancer battle, but donors gave them hope and time 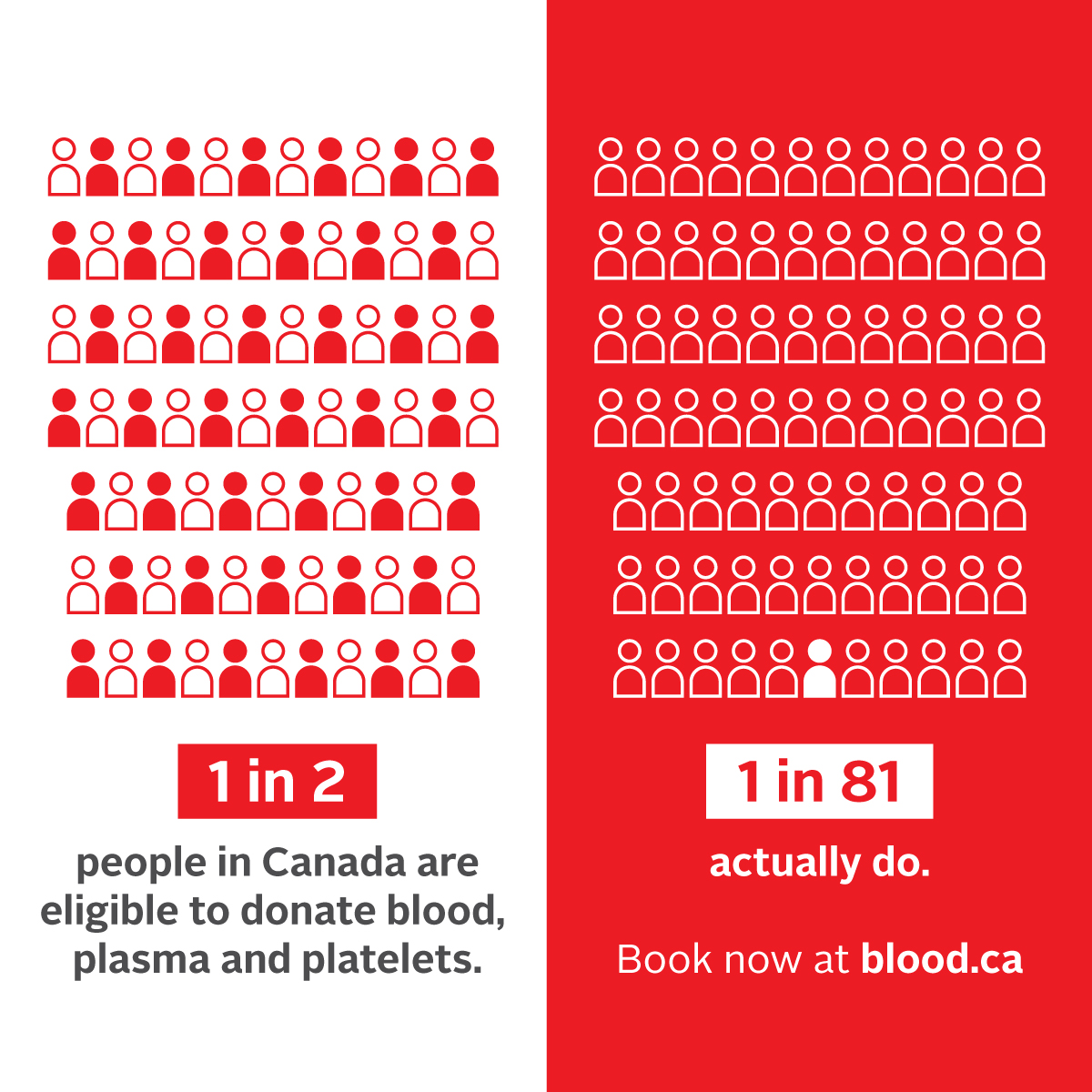 As people in many provinces celebrate Family Day this February, we are feeling grateful for all those families who help us support patients. We also hope they will inspire new donors, who are more important than ever, to support us through the current COVID-19 wave and beyond. We encourage people across Canada to book now by downloading the GiveBlood app or at blood.ca, and to learn more about all ways to give. 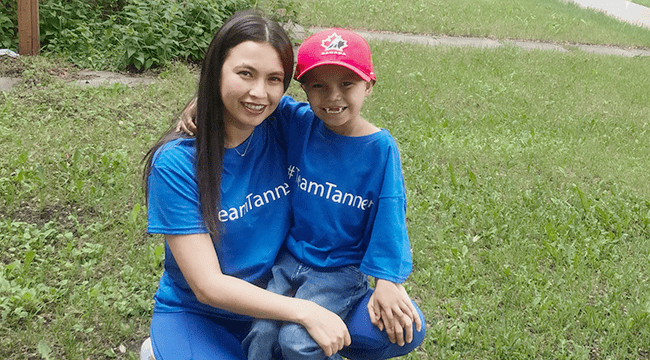