“It’s a Canadian tradition to push blood as far forward as possible in the safest possible way.”

There’s a long, rich history of military blood transfusion and Canadians have been at the front and centre of this field since WWI.

Getting blood where it’s most needed is a challenge at the best of times, but getting it to soldiers injured in combat is an extraordinary feat.

The Canadian Forces Health Services (Defence Research Development Canada) in collaboration with Canadian Blood Services have conducted some exciting research over the past decade. Their work is aimed at pushing blood as far forward into the battlefield as possible to get it to injured soldiers where and when they need it most.

Service men and women put their lives at risk to protect the rights and freedoms of Canadians and others in the countries where they serve. Their efforts during a mission can lead to severe traumas. Faster access to donated blood helps to supplement blood loss, giving an injured soldier more time to make it to the nearest military hospital – increasing their chances of survival.

“Loss of blood from traumas suffered on the battlefield is the most common cause of death among potentially treatable injuries in frontline military operations,” says Maj. Andrew Beckett, Canadian Forces Health Services trauma surgeon. “Survival increases when medical care is begun as soon as possible.” 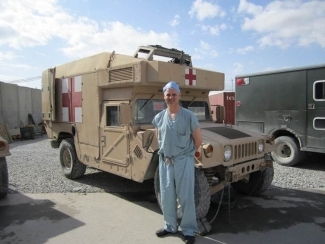 Dr. Andrew Beckett is a military surgeon and a researcher. A trauma surgeon since 2010, his real-life experience in war zones has led to some fascinating and well-informed research investigations.

Transporting blood products as quickly and as safely as possible is a significant challenge.  In 2012, Dr. Beckett and Canadian Blood Services’ senior development scientist Dr. Jason Acker, collaborated on a study designed to simulate the steps required to transport blood quickly to far forward troops.

In a real combat environment, this would involve a parachute jump from high altitude, rough handling, travelling long distances on foot, and potential exposure to extremely warm climates. The stress of these transport conditions may impact the quality of the blood products and potentially limit their clinical effectiveness or even have a negative clinical impact. 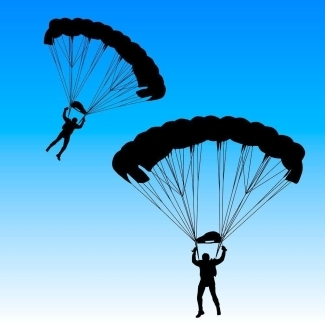 “This study was designed to assess the feasibility of transporting and using blood in an austere, desert combat environment by soldiers at the front line or for soldiers involved in a special operation,” explains Dr. Beckett.

The study involved two groups of six participants who met the necessary health and fitness requirements. Golden Hour Boxes (specialized cooling containers for blood transport) containing units of red blood cells were secured to each participant in Group A. 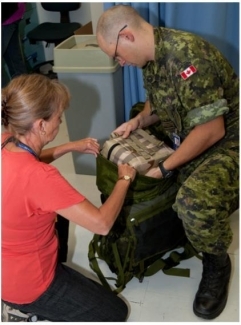 Participants in Group A then walked on treadmills in intervals of 20 minutes for a period of six hours to simulate transport on foot. The simulation was repeated by Group B. Then both groups completed the simulation a second time in extreme climate conditions of 48°C.

Samples of the red blood cells were collected at scheduled times throughout all simulations and were sent to Canadian Blood Services in Edmonton to undergo testing by Dr. Jason Acker and his research team.

“Our role was to test the blood used in this study and we were able to confirm that exposure to high-altitude, foot transport and intense heat did not have a significant impact on the quality of the red blood cells – the blood would meet our quality criteria for issuing blood to hospitals for transfusion,” says Dr. Acker.

The history of blood donation in Canada dates back to World War II when approximately 890,000 blood donations were collected from Canadian donors for military hospitals during the last year of the war. The response was so generous that Canada’s voluntary blood system was born.

Other challenges for research to solve

Because platelets have a short storage life of 5 days, it is impossible to ship them to remote locations. The transportation of red blood cells with a storage life of 42 days can also be problematic to coordinate. Research is needed to find a safe way to ship platelets and red blood cells overseas.  A number of military and civilian blood organizations around the world are looking at the use of cryopreserved red blood cells and platelets to meet the remote transfusion needs of their soldiers and civilians who find themselves away from the local blood bank and bleeding. Cryopreserved red cells and platelets are stable at -80 °C and can be shipped closer to where transfusions may be needed.

Having plasma available for immediate transfusion can be the difference between life and death for an injured solider. “In World War II, lyophilized or freeze-dried plasma was used extensively to treat injured soldiers, but due to concerns over transfusion-transmitted disease this has not been used extensively over the past few decades,” explains Dr. Acker. “Redeveloping this technology for use in remote military and trauma resuscitation would help provide a stable product that could be easily rehydrated on the battlefield or scene of an accident.”  A number of organizations including the U.S. Special Forces and some military in Europe have once again begun issuing freeze-dried plasma to their soldiers.

There may be potential for using aerial drones to transport blood on the battlefield or to remote locations in Canada.

Through discovery, development and applied research, Canadian Blood Services drives world-class innovation in blood transfusion, cellular therapy and transplantation — bringing clarity and insight to an increasingly complex health-care future. Our dedicated research team and extended network of partners engage in exploratory and applied research to create new knowledge, inform and enhance best practices, contribute to the development of new services and technologies, and build capacity through training and collaboration. 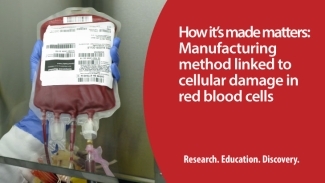 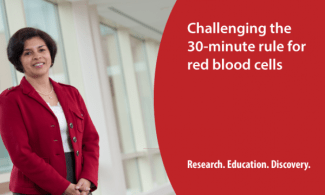 Led by Dr. Sandra Ramirez, a development scientist at Canadian Blood Services’ Centre for Innovation, this research project led to a new standard that will reduce the number of discarded red blood cell units. By Jenny Ryan and Patrick Walton The issue Since the 1970s, blood operators have limited...