Why do scientists use mice in medical research?

“The mouse is the only mammal that provides such a rich resource of genetic diversity coupled with the potential for extensive genome manipulation, and is therefore a powerful application for modelling human disease.”—Justice et al. (2011)

Animal research is an emotional subject, inspiring passionate debate on both sides. Although some find it uncomfortable to think about, it’s important to understand why animals like mice are used for medical science.

Mice fill a special and important role in medical research. Like humans, mice are mammals, and their bodies undergo many similar processes, such as ageing, and have similar immune responses to infection and disease. Their hormone (endocrine) systems are a lot like ours, too. They’re also one of the first species — along with humans — to have had their complete genome sequenced. From this, we’ve learned they share approximately 80 per cent of their genes with us.

Many important breakthroughs in medical science have come from studies carried out in mice. These include treatment for acute promyelocytic leukemia — a form of blood cancer that affects young adults and is now one of the most treatable forms of the disease — as well as gene transfer protocols for cystic fibrosis, which are currently being tested.

Nobel-winning scientific achievements such as the discovery of vitamin K, the development of the polio vaccine, the invention of monoclonal antibody technology now used for cancer treatment, and the unravelling of how neurons talk with each other in the brain all would not have occurred without mice.

Missing in action: Some of what medical science would be missing if not for research in mice

Why are animals still used for clinical research?

Although advances in laboratory technology offer alternatives such as cell and organoid culture (3D mini-clusters of cells that behave like tiny organs) for clinical research, scientists still gain a lot of valuable information from working with laboratory animals such as mice.

What happens in a living body cannot be investigated using a dish of cells, for example. Often disease involves more than just a single organ, and to test new drugs, we must look at a whole body to see how it responds to therapy.

Researchers use many other systems for clinical investigation — such as cell culture, explants, spheroids, in silico modeling and organ culture—but a mouse offers what these alternatives cannot: a whole, living organism in which to investigate disease, response to treatment, development of cancer and other basic research questions.

The physiology and size of mice — they’re small enough to handle and house easily — are the main reasons for their popularity in the lab. In 2013, labs in Canada used just over 1.2 million mice in research according to the Canadian Council for Animal Care, the national body that oversees the strict regulations surrounding health and welfare for all laboratory species.
(CAC Animal Data Report 2013)

Physiologically, mice are very like humans, albeit around 3,000 times smaller (Partridge, 2013) but with similar basic body functions such as blood cell production (haematopoiesis), digestion, respiration and the cardiovascular system. Although differences do exist, mice respond similarly to humans when they are sick or undergo treatment.

For example, through work in mice, researchers recently made advances in treating the blood disease immune-mediated thrombocytopenia, an autoimmune disease where the body makes antibodies that target platelets for destruction before they can be used for blood clotting (Neschadim and Branch, 2015; Yu et al. 2015). In another study, tests in mice with another type of coagulation disorder showed how proteins in a plasma transfusion restore clotting function and stop bleeding (Eltringham-Smith et al., 2015).

“Mouse models of various human diseases, including immune thrombocytopenia, have been relatively easy to develop, since mouse physiology and metabolism resemble those of humans. These models have been extremely valuable to me and my team for investigating ITP. Without them, we would not be as far forward in our research, looking for drugs that could help improve life quality for many patients. We've just published detailed methods on how to set up and use mouse models for ITP.  One model, our dose-escalation mouse model, more closely resembles human ITP than most other models currently in use by investigators."

Why Mice? Breeding and species diversity

Mice also breed easily, with short pregnancies and large litter sizes that are important in helping researchers create their own modified mice. However, most laboratories in Canada source non-specialized mice from commercial breeders, receiving purpose-bred animals with a full breeding history. For researchers, this is very important: Working with animals that show very little difference among individuals increases the value of experimental results, since all the animals respond the same. For even more consistency, we've also been able to clone mice since 1997.

On the other hand, mice are also extremely diverse, meaning that commercial breeders can select for individual traits to create inbred strains with unique characteristics. For example, the CBA mouse has a low incidence of mammary tumour (breast cancer) development, whereas the BALB/c nude mouse is immunodeficient, since it lacks a thymus. These kinds of breed-specific properties are useful, as they allow scientists to focus on specific diseases. Researchers choose mdx mice, lacking mature dystrophin muscle protein, as models for studying Duchenne Muscular Dystrophy, while others choose non-obese diabetic (or NOD) mice as good models to study new treatments for autoimmunity (Wang et al. 2015).

In addition to breeding strategies based on natural variations, researchers also have a number of genetic modification tools available. Since mice share approximately 80 per cent of their genes with humans, modifying mouse DNA is a powerful method for creating animal models of human disease. Techniques such as the Cre/lox system and the newer CRISPR gene editing tool allow researchers to delete, activate or repair genes (Long, et al. 2016), thus recreating human disease in the mouse or examining what happens when they correct a mutation.

Removing or inactivating a gene creates what scientists call a “knock-out” mouse. Alternatively, they can create transgenic animals by making the mice express human genes or carry human cells—or even tissues.  With techniques like these, researchers can create “humanized” mice that respond physiologically almost like us, letting researchers look at the way disease changes a human body and how it responds to treatment. Researchers carry out important work on HIV infection and its treatment using mice with humanized immune systems (Schultz et al., 2012). They’ve also tested out new therapies that prevent Rhesus-negative mothers from becoming sensitized to Rhesus factor during pregnancy, using HOD mice that express a red blood cell–specific recombinant protein (Bernardo et al., 2015).

Even though there are key differences between the mouse and human genomes, those differences aren’t enough to discount the value of mice to the study of human disease. Although regulatory elements might be in different places, shuffled around in the 75 million years since mouse and human evolution parted, their basic functions are preserved.

Animal researchers are constantly mindful of the three Rs:

Animal research is tightly regulated in Canada, with strict controls and oversight in place to ensure welfare and ethical treatment. These regulations cover housing, environmental enrichment, use of medications and anaesthesia, and even breeding of genetically modified mice. Researchers must first present their experimental proposals to local and federal committees to establish an animal care plan and assess factors such as severity, design and scientific value before going ahead with studies.

Penicillin, originally discovered by Alexander Fleming in 1928, did not appear as a lifesaving medical treatment until the work of Howard Florey, who tested its safety and efficacy in mice over ten years later.  Without mice (and other animals) in research, human and animal medicine would be without penicillin, vaccines for polio and meningitis, monoclonal antibody therapy, a cure for acute promyelocytic leukemia, and gene transfer for cystic fibrosis.

Scientists are always looking for alternatives to the use of animals in clinical research, but the role of mice as experimental models for human disease is, as yet, irreplaceable. Even with differences between the two species, carrying out basic research in humanized mouse models of disease gives scientists valuable information. Using mice as surrogates allows researchers to first see how patients might respond to treatment before giving them the drug — a vital step in ensuring patient safety.

Amanda Maxwell is the lead science writer at Vancouver-based Talk Science to Me.

The opinions reflected in this post are those of the author and do not necessarily reflect the opinions of Canadian Blood Services nor do they reflect the views of Health Canada or any other funding agency.
ShareTweetShareEmail 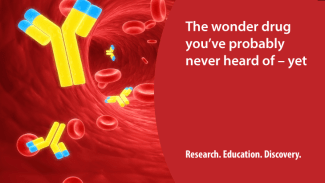 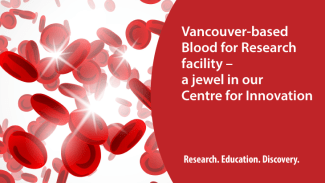 Located in Vancouver, BC, near the University of British Columbia campus, our blood for research facility comprises a whole blood and apheresis donor clinic as well as a research and production laboratory.