This November, the Centre for Blood Research hosted the 11th annual Earl W. Davie Symposium in Vancouver. An annual one-day event featuring expert presentations on vascular biology and thrombosis-hemostasis, the symposium attracts doctors, scientists, nurses, students and other healthcare professionals. It always delivers a program that informs and inspires.

A large dose of inspiration comes from the attendance — every year so far — of Dr. Earl W. Davie himself, the esteemed scientist in whose name this symposium is held. Dr. Davie recently turned 90, but he makes the trip from Seattle, Washington to Vancouver, Canada to attend the symposium. He is the guest of honour, along with his colleague, friend and fellow nonagenarian, Dr. Edmond H. Fischer.

Who is Dr. Davie? Why do people gather every year to enthusiastically honour him? And how does he continue to inspire future generations of medical and biomedical researchers? Read on to find out…

The Waterfall Sequence for blood clotting 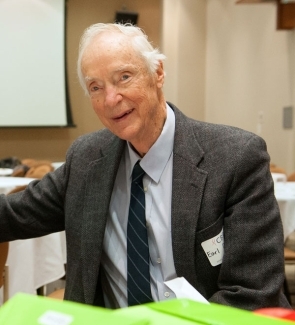 Born in 1927 in Tacoma, Washington, much of Dr. Davie’s career has been spent at the University of Washington in Seattle, where he is currently Professor Emeritus of Biochemistry. He completed an undergraduate degree here in 1950, his PhD in 1954 and chaired the department of biochemistry for many years.

He began his career studying protein structure and function at a time when biochemical understanding of biological processes, and the development of new laboratory techniques to study them, was blossoming. In 1957, while doing postdoctoral studies at Case Western Reserve University School of Medicine, Dr. Davie met Dr. Oscar Ratnoff, who introduced him to research in blood clotting (coagulation) and set the direction for his outstanding research career.

One of the most remarkable properties of blood is its ability to clot. Blood flows through the circulation as a liquid, but as soon as it encounters a site of injury, it rapidly changes state, solidifying and forming a clot to stop blood loss. This is called hemostasis and is a vital system that must maintain a delicate balance. If blood doesn’t clot, bleeding from an injury can be damaging or even fatal, as is the case in hemophilia and other bleeding disorders. If blood clots too readily or at the wrong time and place, the result can also be damaging or fatal, as is the case in stroke, deep vein thrombosis, heart attack and other diseases of thrombosis.

In the 1950s, when Drs. Davie and Ratnoff were studying clotting, it was known that there were factors in blood that were needed to bring about a fibrin clot and prevent bleeding, but the exact process by which this occurred remained elusive. Much of what was known was based on studies of patients with bleeding disorders. These patients were often found to be lacking a certain ‘factor’ in their blood necessary for clotting, and often that factor was named after the patient.

When Dr. Davie met Dr. Ratnoff, he was investigating a patient named John Hageman, whose blood failed to clot when drawn into a glass tube. Together, Drs. Davie and Ratnoff began to purify and investigate ‘Hageman factor’ (now called Factor XII). These investigations led Drs. Davie and Ratnoff to formulate a concept of how the blood clotting process might work — that these clotting factors in blood might be acting on each other in a stepwise manner that ultimately leads to the formation of a fibrin clot.

Although working independently, the authors on these papers recognized each other’s previous work and both essentially described the same mechanism: a simple pattern of clotting factors that, once clotting is initiated, sequentially convert from an inactive to an active form. Each active form activates the next factor in the sequence, propagating and amplifying the signal leading to clot formation. Although the pattern proposed by the waterfall-cascade papers was elegant and simple, it was revolutionary.

It went against the generally accepted theory of clotting at the time, and pushed the boundaries of what was thought possible in terms of enzyme biology and biochemistry. In fact, resistance to the idea likely delayed publication of the Waterfall paper, which was originally submitted to Science by Drs. Davie and Ratnoff in early 1963 but was rejected by the editors. It was later resubmitted to Science unchanged, then accepted and published.

The waterfall-cascade findings were the result of rigorous and methodical studies by two groups working independently, and their findings have stood the test of time. The publication of these papers was a pivotal step in understanding blood clotting, but the work was just beginning.

Over the next decades, work in Dr. Davie’s laboratory and by many others uncovered more about how the process is initiated and regulated, revealed the amino acid sequences for all known coagulation factors, and the structures of many, and determined the DNA sequences and genes for all known clotting factors paving the way for studies looking at patients with bleeding disorders due to mutation in these factors. This body of work has had an immense impact on science and medicine.

Understanding the cascade of events that lead to clotting is the foundation of many treatments and tests. Perhaps most importantly, coagulation factors could now be cloned, making possible the development of recombinant protein therapies to safely treat patients with hemophilia and other clotting disorders. 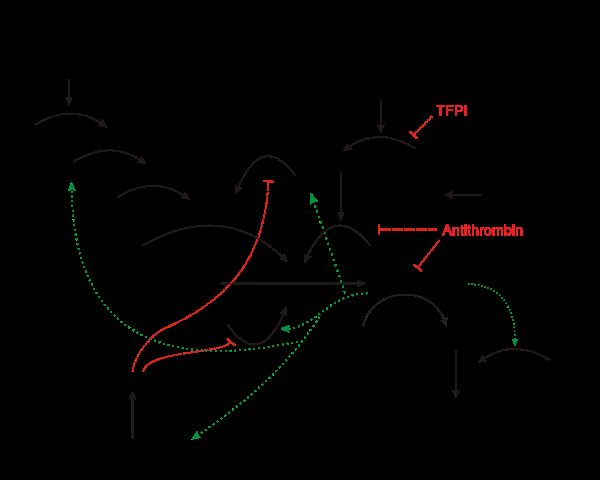 This image shows a current version of the coagulation cascade [CC-BY-SA-3.0, via Wikimedia Commons]. The decades of work that followed the publication of the cascade-waterfall papers have revealed more about how blood clotting is initiated and regulated. Factors are now named by Roman numerals rather than patient names, and their active forms are designated by ‘a’, but the essence of the cascade-waterfall sequence originally described by Drs. Davie, Ratnoff and MacFarlane remains the same.

On the shoulders of giants

Presentations at the 2017 Earl W. Davie symposium described recent advances in the field of hemostasis and thrombosis that build on this knowledge of coagulation to develop new and better treatments to improve the life of patients with bleeding or clotting disorders. The keynote speakers at the symposium, Dr. Katherine High and Dr. James Morrissey, both presented novel therapies for bleeding and clotting, respectively, that build directly upon knowledge of the coagulation cascade.

At this year’s symposium, the attendees were also treated to a presentation by Dr. Fischer. Another scientific legend, together with Dr. Edwin G. Krebs, Dr. Fischer won the 1992 Nobel prize for discoveries concerning reversible protein phosphorylation as a biological regulatory mechanism. Dr. Fischer, now 97, gave an engrossing and entertaining talk of his discovery with Dr. Krebs. For more on the excellent talks presented at this year’s symposium, visit the Centre for Blood Research blog. 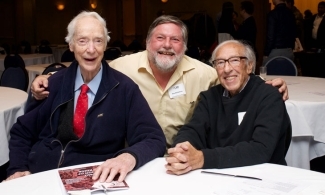 A dose of inspiration

The Earl W. Davie Symposium was founded in 2007 by Dr. Ross MacGillivray, a founder of the Centre for Blood Research and a former student of Dr. Davie’s. In promoting Dr. Davie’s legacy, Dr. MacGillivray, along with Dr. Ed Conway, the director of the Centre for Blood Research, and Dr. Ed. Pryzdial, its associate director and a Canadian Blood Services scientist, endeavor each year to deliver a program that inspires.

One aspect of this is giving an opportunity to patients to attend and speak about their experiences living with bleeding or clotting disorders. This is incredibly valuable and gives a perspective that is often missing from the program of scientific conferences and symposia. Following a scientific or medical presentation on a disease with a presentation from a patient living with that disease presents a juxtaposition that is surprisingly moving, and serves as a great reminder why on-going work in this field is necessary.

The Earl W. Davie Symposium also provides opportunities for students and early career researchers to speak. It is not easy to stand up in front of eminent scientists such as Dr. Davie and Dr. Fischer and present your work, but it is an incredible opportunity. It is remarkable to see these emeriti scientists mingling and sharing their knowledge and perspectives with students and researchers many decades younger than them.

This symposium, in which patients give their perspective to medics and scientists, and graduate students mingle with Nobel laureates, is a wonderful tribute to Dr. Davie and all who have worked to understand how blood clots. 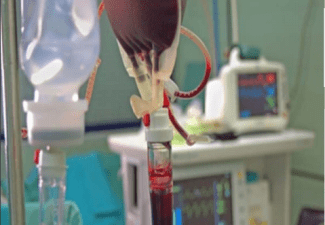 Since 2007, Canadian Blood Services and the Ontario Regional Blood Coordinating Network (ORBCoN) co-chair the planning and execution of an annual transfusion medicine symposium in partnership with a community hospital. The involvement of the community hospital is key in identifying topics of...