In 2012, I was enjoying an evening of television with my father. Things were getting late, so after a couple of teas we decided to go to bed. The next morning was indescribable: it changed our family's lives forever.

My dad woke up screaming, telling me he couldn't feel his legs. I thought he was joking as he usually is a Grade A prankster. I fell back asleep to be woken up by him screaming louder - I knew I had to get up. The tone in his voice was distressed, and the grim look on his face was terrifying. I called an Uber and I lifted him to the best of my abilities downstairs, where he stumbled on a step and fell downward towards the base. With the help of the cab driver, we miraculously got him inside the cab, and I could see the pain in his eyes. In that 15 minute drive to Royal Victorian Hospital in Barrie, Ontario, I could see his health slowly decline: his breathing slowed down, and he began losing his voice. We had no clue what was going on, but we eventually got him to the hospital. It was a difficult week or so watching as doctors came in and out of his room - I was unable to visit him until he stabilized, and until they determined his condition. He was eventually diagnosed with Guillain-Barré Syndrome, a rare disorder where the body’s immune system damages its own nerves. The damage to the nerves causes muscle weakness and sometimes paralysis. While its cause is not fully understood, the syndrome often follows infection with a virus or bacteria. In his case, he was paralyzed for quite a long time and endured comas, restraints, and a hefty amount of pain. This condition is oftentimes treated with plasma in the form of medications. I still remember the day when he regained his voice and was able to talk to myself and my grandma. I still remember our first walk together after he underwent months of physio - I couldn't stop crying tears of joy. Flash forward years later he still has some nerve damage, but if you met him you'd never know.

Thank you to every donor who contributed plasma to save my father's life; without you he may have had to leave his family behind him. I'm eternally grateful for your contribution. I currently work as an employee of Canadian Blood Services, and recently became a blood donor. Everybody can make a difference in this world, and not a day goes by where I don't think about that. 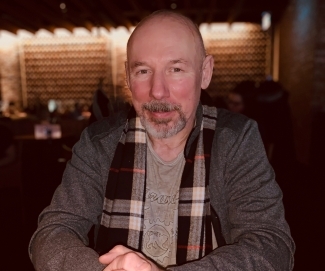