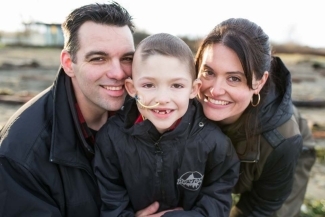 “We were terrified,” Sharon recalls. “I don’t know if anything can prepare you to walk the cancer road, but it just seemed so unreal. Everything happened so fast.”

It was hard to believe that just a couple of months prior to Cameron’s diagnosis of a grade IV malignant embryonic brain tumor, he was swimming and climbing trees; building skyscrapers with his LEGOs; and running around the house in a superhero costume with his younger brother.

Sharon says that her son has always been adventurous, energetic and outgoing – which is why her family noticed right away, midway through the school year, when Cameron wasn’t acting like himself.

At first, they chalked it up to him just feeling worn down from the hustle of the past semester. Like every mother, Sharon also began to worry that he might be getting bullied.

Then, soon after Cameron returned to class after the holiday break, Sharon received an urgent call from his school.

Something was wrong with Cameron. When his teacher spoke to him in the classroom, he couldn’t respond or make eye contact. He just sat there – as though he was trapped in his own body.

“The next thing I knew, we were in an ambulance with Cameron rushing him to the nearest hospital,” says Sharon. “We found out that he had been having focal seizures, so they ordered a CT scan. That’s when they found the mass.”

Following his diagnosis, Cameron’s family had to act fast. His tumor was growing rapidly, and he needed emergency surgery to remove it.

Very quickly, Cameron required blood. A lot of it.

His brain surgery was followed by six rounds of high-dose chemotherapy, three stem cell transplants, and a few rounds of experimental radiation therapy. Cameron ended up receiving a total of 50 transfusions of blood products throughout the course of his treatment.

Sharon says that seeing the reliability of the national blood system and stem cell registry firsthand, has made her family forever grateful to Canadian Blood Services and the generosity of donors.

“We literally saw our child’s life in the hand of donors,” she says. “Donors helped give our family the precious gift of more time. I will be forever grateful for every dollar raised, and for every drop of blood donated that helped to give my son a fighting chance.”

Sharon never dreamed her family would need access to lifesaving blood or stem cells. But the reality is, more than half of all Canadians will require blood products at some point in their lives.

To keep pace with demand, Canadian Blood Services needs to attract over 112,000 new donors each year to meet every patient’s needs. When you make a financial donation to Canada’s Lifeline, you are helping to support critical programs and initiatives that connect patients with lifesaving products and services where and when they need them.

Making a financial donation is also a meaningful alternative for those who cannot donate blood, but still want to help save and improve lives. Help give families like Sharon’s the gift of more time, by making your financial gift today at give.blood.ca.

A note to our donors: Sadly, following his long battle with cancer, Cameron passed away on May 16, 2020. Cameron and his family have been incredible advocates for Canada’s Lifeline, and our thoughts and deepest condolences go out to them during this heartbreaking time.